Reaching 11 Billion Liters While Responding In Haiti With Globalmedic

Recently in the midst of our multi-partner hurricane response in Haiti, we have reached the latest CSDW milestone providing 11 billion liters of clean drinking water. Our efforts in Haiti date back more than a decade to the earliest days of the CSDW Program in 2004 when we began working with PSI to socially market the P&G packets (called PUR in those days). Over time we re-focused our work in Haiti to provide the packets primarily for emergency response efforts with many of our international NGO and local Haitian safe drinking water partners. 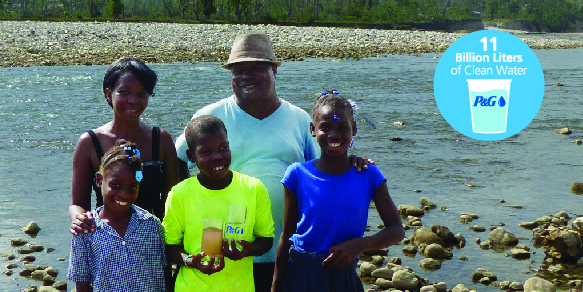 The Janty family lives in Torbeck, in the Sud province and were the recipients of the 11billionth liter of clean water provided by our Canadian emergency relief partner GlobalMedic. Esther Lin and his wife Jean Memene have 2 daughters - Priscilla (10), Abigail (8) – and their son Pierre Louis (7).

On October 4th, Hurricane Matthew caused widespread devastation in Haiti. With winds up to 250km per hour, the storm destroyed homes and anything in its path. One of the most life-threatening effects after the hurricane passed was the contamination of local water sources in communities throughout the country.

Along the Lacul River you can see the damage done by Hurricane Matthew as roofless homes expose kitchens and bedrooms like a dolls house. The once lush-green palm trees are now dry and brown, their twisted trunks just lying in the mud. Amidst the devastation though you can also see hope. After so many natural disasters over the years, the resilience of the Haitian people is remarkable and rebuilding has already started.

Health is also returning in part due to efforts like GlobalMedic’s and other emergency relief organizations to provide household water treatment options like the P&G packets which help to prevent exposure to waterborne illness such as cholera which has become prevalent in Haiti.

The Janty’s were using a well before Hurricane Matthew struck their community. After the storm, the water was contaminated and the whole community continued to use it as there was no alternative. People started to get sick from the water.

Jean was fearful that her children were going to get sick. After the distribution of P&G packets and training on how to use them, she and her family felt safe. Today her children are back in school and the community is working to restore the water quality of their permanent water source. In the meantime, P&G packets are the ‘bridge’ until the safe water source is reestablished.

As Haiti works to recover from this most recent disaster and we recognize the power of clean water, we are also reminded of the importance of proper sanitation not only in times of emergency but every day. Saturday, November 19th is recognized as World Toilet Day by the United Nations and UN Sustainable Development Goal #6 aims to ensure everyone has affordable access to clean drinking water and proper sanitation by 2030.

Sanitation, or the lack of it, also has a major impact on families and livelihoods. Toilets not only improve health but they also play an important role protecting the safety and dignity of people, especially for women and girls around the world. We still have a long way to go as 2.4 billion people are living without a toilet and there are significant taboos to break through but #WeCantWait. Collaborations between communities, governments, NGOs, and the private sector to provide comprehensive water, sanitation and hygiene efforts are underway and together we can improve standards of living and help communities thrive.