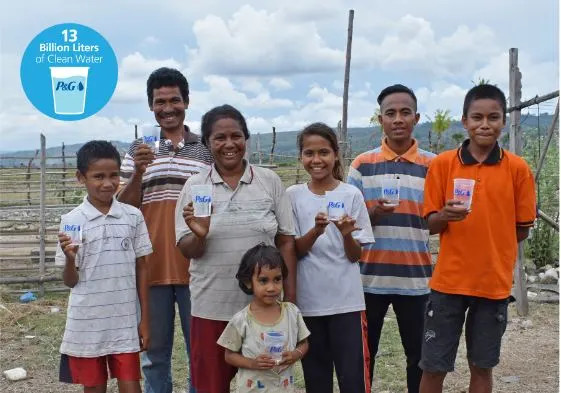 We celebrated the 13 billion liter milestone with Benyamin and Emirensiana and their five children (2 daughters and 3 sons) and our partner ChildFund in Malaka, Indonesia. ChildFund has a long history in Indonesia which began in 1958 and the family is part of a community working that began using the P&G Purifier of Water packets two years ago.

Benyamin, Emirensiana and their children – son Febrianis (18), son Oktavianus (16), daughter Helena (15), son Mateus (12) and youngest daughter Maria (4) - told us about their family life since they emigrated from Timor Leste in 1999 in hopes of a better life in Indonesia. Benyamin works in farming, Emirensiana works in the home and all five children attend school. The family’s water source is a local public well and the water drawn from it is not safe to drinking without first boiling it. Before receiving the P&G Purifier of Water packets, the family used to spend part of their income each year in order to rent a vehicle to gather the firewood needed to boil the water, since it was only available in an area far away from their home.

The older children all participate in daily water collection. They walk for 30 minutes to the nearest water source. Once they fill all of the containers, they make the return journey home, using a cart to help transport the water. Sometimes little sister Maria rides along on the trip. While this chore is still necessary, the process of then preparing the wood and boiling the water took time away from the childrens’ lives and resulted in many late arrivals to school or skipping it entirely. Since the family began using the P&G Purifier of Water packets, they have seen a number of positive benefits. For one, the family shared they have grown closer together as a family. Helena and her mom enjoy their ‘stirring’ time together which gives them time every day to chat with each other. And the children all have more time for playing sports and spending time with friends. Mateus tells us he hopes to become a soccer player one day. The money the family has saved from not having to collect so much firewood helps with school fees, enabling the children to continue to attend school and get an education. Febrianis, who is in his last year of high school, hopes to attend university while Octavianus would like to become a teacher one day. Most importantly, Emirensiana tells us that since they began drinking the treated water her family is healthier and experience fewer illnesses and stomach aches.

As P&G employees, retirees, and business partners join us in celebrating these dual milestones of 13 Billion liters delivered in 13 years of the Children’s Safe Drinking Water Program, we’re appreciative of the worldwide network of partnerships that made these achievements possible. We’re looking forward to transforming even more lives together through the Power of Clean Water!

CSDW is Getting Ready to ACTIVATE